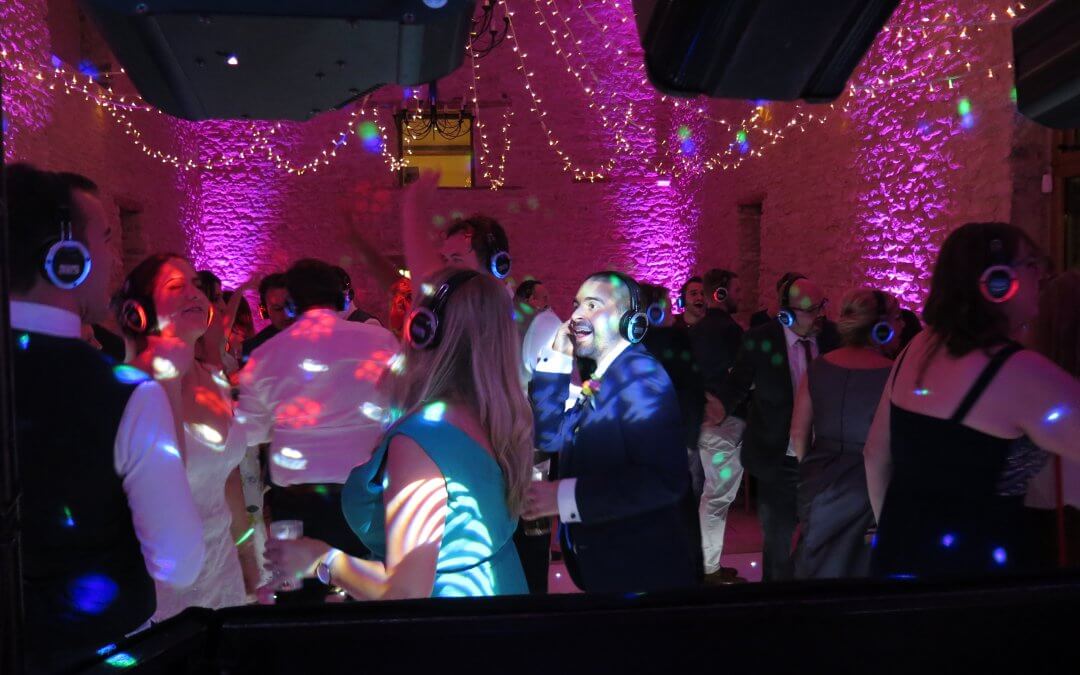 We were thrilled when recently asked by a wedding client if we could provide a “headphone” or “silent” disco for their wedding. The plan was to originally open up with an hour or so before heading into a more traditional disco.

For those that haven’t encountered a silent disco before let me explain how it works. Instead of playing music out of loud speakers, it sent out via a wireless signal straight to headphones that each guest wears. These headphones also have a switch that allows you to choose which “station” or “channel” to listen to. This means you can have two (or more depending on headsets) styles of music playing at the same time!

The main benefit of this particularly at a wedding is that it allows both younger and older guests to listen to their favourite music. We are generalising somewhat here but for our client we had “disco classics” such as Abba, Michael Jackson etc.. on channel one. The younger guests have the option of switching to channel two with more up to date party anthems such as 90s rnb and modern pop.

The knock on effect of this is that you can keep more of your guests on the dancefloor at the same time, without having the fear of clearing the dancefloor. The LED lights on the side of the headsets show what channel you’re listening to so you can see what everyone is enjoying. That said usually the singing is a dead give away!

The idea of having the headphone disco at N&L’s wedding for just an hour soon went out the window and it ended up lasting the entire night. This was down to the dancefloor always being full from start until finish.

The other positive from this setup is that if you wanted to have a conversation with someone you just take your headset off. No shouting at the barman your drink order or having your older guest take refuge in a side room far far away.

“We wanted to re-live our uni days at our wedding, so opted for a silent disco! Neil was able to arrange the whole thing for us which was a big plus as it made the whole process a lot smoother. It’s fair to say it was a huge success, the dance floor was full from the first song to the last! We’ve had so many messages from guests saying how much they loved it, and we can’t thank Neil and his team enough for making it a night to remember! Thank you so much, Nathan & Laura”

While this wasn’t an issue for our clients in this case, the silent disco is great choice for entertainment and reducing the noise. This is ideal when you maybe have neighbours close by or wish to party until the early hours while guests are sleeping nearby.

We find that the only nosie generated is by guests singing loudly to their favourite tunes that are coming through their headsets. It also means that folks can take them off and easily have a chat with each other without going outside. This allows you to keep all of your guests in the same area as well which might be another consideration for your event.

To find out more about our silent disco service then please fill in the enquiry form below. If you can include venue, performance times and how many headsets you would require.